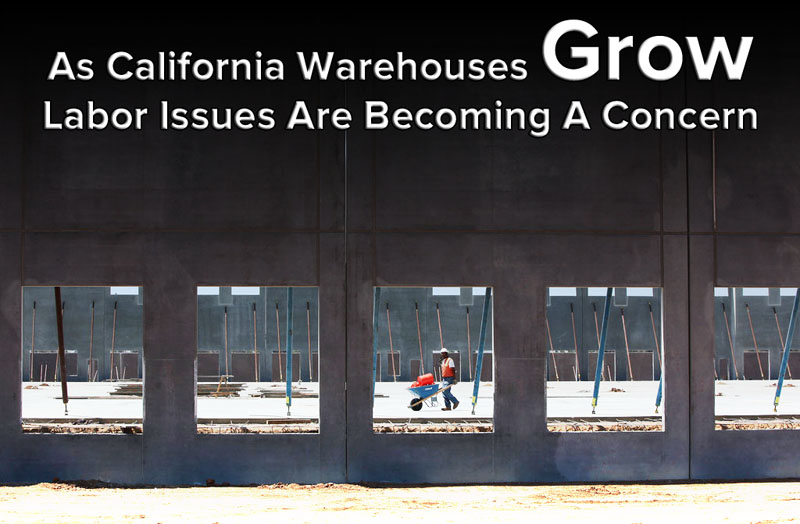 MORENO VALLEY, California — As the freeway snakes toward this city an hour’s drive east of Los Angeles, the strip malls gradually give way to the california warehouses that supply their goods. There are dozens and dozens of them — in some places, the gray squat buildings are the only things visible from the road — a labyrinth of sprawling distribution centers for retailers that include Walgreens and Wal-Mart, Toyota and Home Depot.

In the last decade or so, Moreno Valley and the rest of the Inland Empire have become the nation’s largest hub of distribution warehouses, where workers sort the imported goods that come through Los Angeles ports. In the industry, known as logistics, those goods are prepared for and delivered to stores across the country.

By most estimates, Inland Empire, with its $300 billion piece of the industry, is the country’s most bustling trade gateway. Lured by “cheap dirt,” as many here put it, companies are only increasing their demands for large tracts of land in the region.

Still reeling from the economic downturn, many community leaders in the Inland Empire say they are desperate for jobs, particularly for low-skilled workers, many of whom lost their jobs in construction after the housing collapse. They see the region’s warehouses and related delivery industries — which now employ an estimated 200,000 people, more than Salt Lake City’s population — as the best way out of the doldrums, seeing salvation in the form of shipping containers.

“We know we face challenges, and these bring in jobs and pump up the economy right away,” said Barry Foster, the director of economic development for Moreno Valley. Last year, the footwear company Skechers opened a worldwide distribution center here, and the city is also moving toward approving plans for a 40-million-square-foot warehouse complex.
Continue reading the main story

“We need to get to the point where we have a job for every household,” Mr. Foster said. “Right now we have half of that. These are good jobs that would keep people who are living here working here and have a foothold into the middle class.”

California Warehouses Up Against The Skeptics

But there are plenty of skeptics. Environmentalists say the parade of trucks has a dangerous impact on the air in the area, contributing to an already high rate of asthma in children. Labor advocates say a vast majority of the jobs provide minimum wage, often without benefits.

In some warehouses, workers are paid based on how much work they complete, like the number of trucks they empty. In October, a state investigation found that two staffing agencies that supply workers to Wal-Mart distribution centers failed to provide workers with proper information about their wages, making it unclear how much they were earning on the job. The state fined the two staffing agencies more than $1 million.

Julie A. Su, the California labor commissioner, has heard many complaints about the industry since taking office last year. But she said investigations were often stymied because so many warehouses use staffing agencies, which classify workers as temporary, even though they may work for years in the same building.

There are frequent complaints that workers are told to show up each morning — often with the reminder that the first to arrive will be the most likely to get work — only to be informed that there is no work for them that day. Under state law, in those cases, workers are to be paid for two hours, but many say they rarely are.

“There seems to be an unfortunate model of subcontracting used to cut costs and really depress the working conditions,” Ms. Su said. “It really reflects the economy moving to this kind of day-labor system in a way that really can destabilize the economy.”

After the state investigation, Warehouse Workers United, a union-backed advocacy group, filed a lawsuit in federal court against the agencies in October, saying workers were “forced to work long hours under oppressive conditions for legally inadequate pay” that was below the state minimum wage of $8 an hour.

The criticism has done little to slow the growth so far. As of now, there are more than 400 million square feet of warehouses and distribution centers spread through the Inland Empire, roughly the amount of office space in Midtown Manhattan. Dozens more large buildings are being built on speculation, with investors confident that companies will eagerly come in.

For higher-skilled jobs, annual salaries do reach into the middle class, with workers bringing in an average of $46,000. In this area, where unemployment reaches 15 percent in several cities, such jobs are sorely needed.

“Construction is obviously in great trouble, and here is a place where we can just keep adding jobs — it is the only industry adding thousands of jobs,” said John Husing, a local economist who has enthusiastically endorsed the growth of the industry. “You can have people come here and find a robust blue-collar workforce eager for employment.”

Workers in the warehouses frequently complain that it is difficult to know who is in charge at the distribution centers, where multiple subcontractors operate in the same building and workers receive different pay depending on which agency they work with, although the jobs are almost identical.

Limber Herrera, 28, has worked in the logistics industry in the area for more than five years. He now makes $12 an hour emptying shipping containers at a distribution center that processes goods for Wal-Mart. These days, his concerns are less about pay than basic safety at work.

“There’s nobody who cares about our health — there’s just pressure to empty cases at a fast pace,” said Mr. Herrera, who is part of a complaint that Warehouse Workers United filed last week with the state. “All the dust we inhale, all the heavy things we have to lift with all our strength and no support, it’s very hard.”

California Warehouses Are Absolutely Crucial To The Ecomony 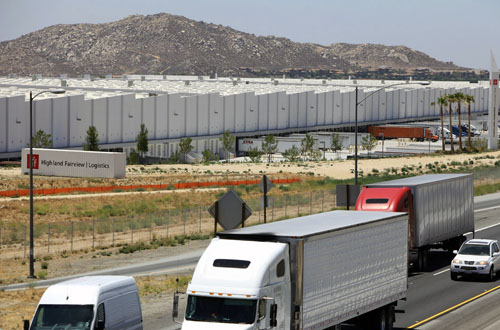 Overall, the warehouse and logistics industry accounts for roughly 10 percent of all jobs in the Inland Empire, more than any other private industry. But some economists have pointed out that earnings vary widely, with the median annual salary around $32,000. And even that figure does not take into account the thousands of workers who are employed by staffing agencies making minimum wage.

Iddo Benzeevi, the chief executive of Highland Fairview, which owns the 1.8-million-square-foot distribution center leased by Skechers, said that he planned to open several more facilities and that warehouses would increasingly rely on more skilled workers to operate computers.

“This is the center for all of the trade in the world,” he said. “You can see much of the country with a drive of just a few hours.”

The Skechers warehouse is filled with machines that use sophisticated technologies to make basic processes move more quickly and often with little human assistance. Skechers executives said they employed 550 to 800 people in the warehouse depending on the season, but they declined to give any information about the kinds of jobs available and the salaries employees receive.

Some local critics have said the new center has done little to generate new jobs, since many of them were simply moved from six smaller warehouses the company had operated for several years in Ontario, about 20 miles to the west.

“It’s attractive because it’s something that governments can take advantage of now,” said Jordan Levine, the director of economic research at Beacon Economics, a research and consulting firm. “There’s no need to have to recruit an educated workforce base or have a lot of strategies around.”

He added: “All that stuff takes time and money and decades to bear fruit. This is far more expedient.”